Sosua`s history began with the influx of Jewish settlers back in 1940,  after the Evian conference and the agreement between Trujillo and then U.S. president Roosevelt. The Sosua Jewish museum was established in honor of the ones who had to escape from the horrors of the war in Europe because of the German Nazis. About 600-800 Jews arrived at the island between 1940 and 1945, mostly well educated citizens that had to radically alter their lives, with the task of resettling abandoned banana plantations despite their total lack of farming skills. The Jewish Museum ( Museo Judio ) located next to the Casa Marina Hotel was inaugurated Feb. 3, 2003, in the presence of many dignitaries including Israel’s ambassador. 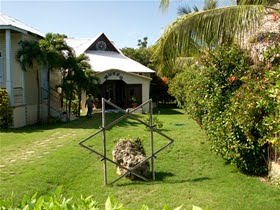 Star of David in the Museum 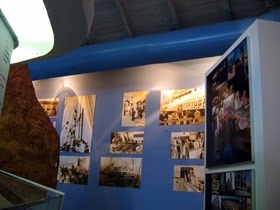 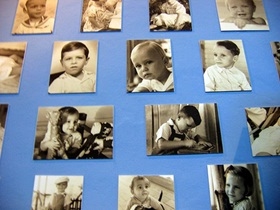 A DISPLAY OF SOSUA`S HERITAGE

The Jewish Museum in Sosua has an exhibition of black and white photographs depicting the lifes of the Jews that gave shape to what is today a thriving community. Marion A. Kaplan, a professor of modern Jewish history at New York University and the author of “Dominican Haven: The Jewish Refugee Settlement in Sosúa, 1940-1945” (Museum of Jewish Heritage), the exhibition’s companion volume, puts the story in context. “In comparison,” Kaplan writes, “about 100,000 Jews reached Latin America and the Caribbean between 1933 and 1942, and about 160,000 came to the U.S. between 1933 and 1942.” Kaplan adds: “But numbers do not convey the full story.

The United States, for example, only once fulfilled its yearly quota of German-Austrian immigrants between 1933 and 1944, and that was in 1939, after the shock and empathy that emerged in response to the open violence against Jews in Germany on November 9, 1938, known as the November Pogrom, or Crystal Night.”

At the museum entrance is the text of the 1940 agreement between the Trujillo dictatorship and the Dominican Republic Settlement Association (Dorsa), the New York-based organization that intended to rescue thousands of Jews from impending doom in Austria, Germany, Poland, Hungary and Czechoslovakia. 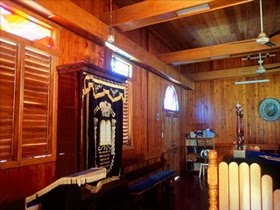 Torah at the synagogue 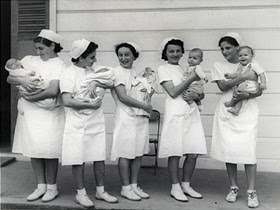 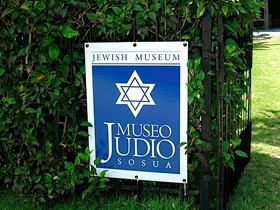 An important exhibition of the Museum of Jewish Heritage in New York was inaugurated in February 17-July 25, 2008 showing photographs, artifacts, memorabilia and documents representing the migration of the jews to the Dominican Republic starting in 1940 and the creation of Sosua as a Jewish settlement. This particular effort had the support of State Senator Eric Schneiderman, the American Jewish Congress, the American Jewish Joint Distribution Committee and other important Jewish-American organizations. See the details of the exhibition in the Museum of Jewish Heritage website: http://www.mjhnyc.org/final/

JEWISH REFUGEES IN THE TROPICS

The son of a successful entrepreneur in Germany, Luis Hess was forced to leave his life behind in Erfurt and start again in the Balearic island of Ibiza, in Spain.  Civil war broke in Spain in 1936 and Mr. Hess was once again on the lookout for safer lands, going to France and getting a job in Paris. In 1939, his residency permit expired and no renewal was offered, so he had to find an alternative. He found out about the DORSA, an association established for the resettlement of Jews in the Caribbean island of Dominican Republic, and soon he departed from France to the Dominican Republic. 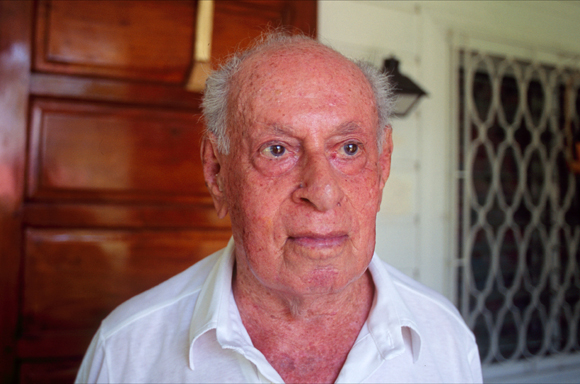 Upon arriving to the island, Mr. Hess soon departed to the capital of the Dominican Republic, Santo Domingo. There he found a job as a teacher and translator. He later worked for the DORSA, and soon became a main contact between the Jewish community and the local government. Mr. Hess was the first Jew to marry a non Jewish local from the Dominican Republic, and was highly criticized by his community. Despite that, he became a teacher and later the director of the Cristobal Colon school, that was later renamed Luis Hess, in honor of Don Luis. Mr. Hess passed away on February 8, 2010 and he was 102 years old. Sosua`s beloved honorary citizen was buried next to his wife, Ana Julia.

SURVIVORS OF THE HOLOCAUST: MARTIN KATZ

Martin Katz is one of the founders of Productos Sosúa. At 86, he still goes to his farm every afternoon, often taking with him his three grandchildren: Jeriel, René, and Niki. “We never had any problems here. People are very sweet,” said Katz, who arrived in 1940 and eventually married a Dominican woman named Rosa Reyes. “When cruise ships started coming from Germany, I met tourists my age who had been soldiers in Hitler’s army. This was like a bucket of cold water on my head, and after that, I never wanted to go back to Germany.” Mr. Martin was one of the first settlers to come to Sosua, and has been featured in German newspapers and other interviews.

When their ship arrived to the area now known as Sosua, they found a remote, rudimentary, jungle that used to be a banana plantation. “I could see some houses. I was surprised when I saw lights,” said Martin Katz, 82, one of the original Jews to settle in Sosua, along the north coast of the Dominican Republic, in 1940. Regarding dictator Trujillo, Jews see him in better light than Dominicans: “I’m not sure why he helped us,” said the old man, who lost his sister in the Holocaust. “The important thing is that he did. He saved my life.” it is believed that Trujillo helped the Jews because of diplomatic issues. Mr. Martin was the head of a noble family that still follows Jewish traditions; he can be seen pictured below building the first cheese press ( at left with black trousers ). He passed away on February 27th, 2008.

Arrival of the first Jews in Sosua
Building the first cheese press
Woman milking a cow in Sosua
School transport with children
The first synagogue
Jewish men in the dining room
Herman Strauss was one of the original settlers of Sosua. He was one of the founders of productos Sosua, the dairy farm business that was probably the most successful enterprise created by the community. Mr. Strauss was the last living legacy from the original settlers, after the passing of Luis Hess.

The Synagogue: Next to the Sosua Jewish Museum there`s the synagogue, the original wood-frame synagogue used by the refugees. It is used by the few remaining Jews still in Sosua,  and like the museum, it is necessary to call before visiting because it is not open with a regular schedule. The author of this document had to visit a nearby office belonging to one of the oldest Jewish families here, the Strauss.

I was told they kindly open the museum to any visitors, and the office is just 20 meters away next to the banco Popular and Bailey`s cafe. As of this update (Feb 21st, 2018 ) we have been granted access many times for the past several years; sadly, Mr. Herman Strauss passed away one year ago to this month. Juanita is still in charge of access to the Museum and the office is moved to a modern new plaza building behind Baileys.

INSIDE THE JEWISH MUSEUM

Faded clippings with articles and old documents are displayed on a wall of the museum, witnessing the history of the refugees .  One wall of the Museo Judio contains faded news clippings such as a May 11, 1940, article from the New York Times entitled “Exiles on Last Lap to Dominican Site,” while another showcases sepia prints by La Nación photographer Kurt Schnitzer and original paintings by artist Ernesto Loher — both children of Jewish refugees who settled in Sosua.

There’s also a colorful stained-glass Star of David and a chart extending from ceiling to floor, listing the names of settlers, the date each arrived and their country of origin. Artifacts on display include a large wooden menorah crafted by hand in the colony’s carpentry shop; a scale used in Erich Sygal’s pharmacy; an original telephone switch from the Dorsa offica; a branding iron used to mark cattle, and a metal milk container from the Productos Sosua dairy.

The ambassador of Israel in the Dominican Republic, Mr. Bahij Mansour visited Sosua`s synagogue on April 23rd, 2015 to participate in the 75th anniversary ceremony of Sosua`s Jewish community. Several descendants of the original settlers were present, also local authorities.

After unveiling a new commemorative stone in the gardens of the Jewish museum and synagogue in Sosua. This ceremony also was in occasion of the 67th anniversary of the independence of Israel as a State. The ambassador was invited to tour the museum and its historic displays showing the historic photos and documents from Sosua`s early settlers.

The original synagogue of 1940

Some excerpts and photos courtesy of Larry Luxner and other authors. This page is dedicated to the Jewish community of Sosua, Dominican Republic.

This website uses cookies to improve your experience while you navigate through the website. Out of these, the cookies that are categorized as necessary are stored on your browser as they are essential for the working of basic functionalities of the website. We also use third-party cookies that help us analyze and understand how you use this website. These cookies will be stored in your browser only with your consent. You also have the option to opt-out of these cookies. But opting out of some of these cookies may affect your browsing experience.
Necessary Always Enabled
Necessary cookies are absolutely essential for the website to function properly. This category only includes cookies that ensures basic functionalities and security features of the website. These cookies do not store any personal information.
Non-necessary
Any cookies that may not be particularly necessary for the website to function and is used specifically to collect user personal data via analytics, ads, other embedded contents are termed as non-necessary cookies. It is mandatory to procure user consent prior to running these cookies on your website.
SAVE & ACCEPT